I wanted to write a summary post this week, to collect together all the information about where I am now, what day to day life is like and where I’m headed but somehow there doesn’t feel time to write one this time. I’ve only had one night in a hotel this week, in two hours I’m leaving the hotel to go and meet someone who has invited me to stay at their house tonight, a friend of Anna, who invited me into her house for breakfast a couple of weeks ago. I’m not sure how much time there will be for the silent staring that writing involves for me, the sitting in front of the blank page in silence, allowing words to come out. So instead I’ll just blurt something for you here today, maybe a collection of small memories that keep coming back to me.

I met a soldier on the road; I looked up and there he was, a tall man in dusty camouflage clothing and a peaked cap standing in the centre of the stony road staring at me quizzically. We talked a little, as much as I was able, as we walked along together. He told me he was fighting in the east, was back in his home village on leave. He stumbled as he walked and I realised this man was deeply drunk. He mimed shooting a gun, turned his shoulder away from me and pressed his back against me, shooting away from me, telling me he fought to protect other people. The action of his body against mine, the placing of his body in the line of fire brought me suddenly tearful. Regardless of the stupidity of a conflict fought over territory hundreds of miles from this peaceful village, the foolish romantisicm of macho heroism; in seeing the war as a geopolitical power game where Ukraine is the chessboard upon which unfolds an episode of the match between East and West – the Russian interference in a conflict that western powers choose to ignore. In looking at the bigger picture I had overlooked the bravery of a man going to fight, of standing up to say ‘I will do this’, so normalised is the action of a soldier. He took me to the village shop where he bought me a shot of spirits and a biscuit. There were other drunk men there and the conversation quickly became intelligible. I took my leave before the friendly arm around my shoulder became sexual but I keep thinking of this man’s hands as he pointed to my map – Mishe was his name, or something slurred like that – they were puckered with scars, work thickened and all the hair was burnt off them, burnt to short frazzled tips, right past the wrists.

I almost stole a kitten.

I’ll be honest with you people, I want an animal to follow me and for us to become friends so that we end up spending many happy years together in an Instagram style success story. This is my dream. I will take a waify stray and feed them up and they will be my companion for thousands of miles. It almost happened, I sat in a bus shelter and a small kitten appeared at the side of it. I mewed at the kitten, it mewed back. There was chemistry, let me tell you. It jumped up to the bench and proceeded to climb all over me for 20 minutes, sitting on my chest and rubbing under my chin, walking around up onto my shoulder, across the back of my neck and down to underneath my chin again. It was such a content little animal, I rubbed and stroked it, not minding that each tiny paw carried the faint but significant aroma of cowshit. We bonded. I stood up, the kitten stayed on my shoulder, oh this was good. I put on my rucksack, the kitten rode on the back of my neck. I wasn’t actually seriously trying to keep this kitten, not really, more experimenting to see how a kitten would adapt to my walking, should I decide to own a cat and ask it to ride on my shoulder all day, you know, hypothetically speaking. I walked away down the road a little, the kitten mewed. I put it down, in case the mew was a sign of distress at suddenly finding yourself atop a moving person. The kitten followed me. I walked further along, looking back every so often – the kitten followed, picking its way over the stones. I wasn’t far enough away from the bus shelter that I couldn’t send this cat back, tell it to go away and have it find it’s way home but I felt totally unwilling to do that.

Fortunately, my theft by omission (of failing to take any curtailing action) was stopped in its tracks by a woman calling down the road at me. I imagine it was something like ‘hey, where are you going with my cat!’ I looked down at the kitten, winding it’s way around my ankles and poked it with my walking pole. ‘Go back to the woman’. The kitten absorbed the push of the stick in that limpid way that cats have and continued undeterred. I picked it up and walked back to the woman, she had a raised eyebrow, took the kitten in hand and asked me some questions that I didn’t understand – probably along the variety of why I would be walking through villages in strange clothing and enticing cats to follow me. I said goodbye and turned to walk away, having to admit to containing within myself the character flaw that yes, I may very well have stolen that cat.

Every village house in Ukraine is behind a fence; there are chained dogs in every yard, condemned to live out their lives as the noise makers at every passer by (they are very good at this, my movement through every village involves the passing from one volley of barks to another). Sometimes the barks are interested, sometimes they are angry, almost never does an unchained dog approach me for a friendly sniff and pat. There are unchained dogs too, they’re the annoying ones that follow me, sometimes slightly too close to my heels for comfort so I wave my stick at them, which unleashes another wave of vocal hostility. But I digress, this memory is about subsistence agriculture, not dogs. Outside every gate there is a bench, sometimes elaborate but usually just a plank nailed to two logs set into the ground. People sit and chat to passers by, watch the life of the village, exchange pleasantries. There have been bulging white sacks sitting on these benches and I looked at them as I passed, thinking this is the Ukraine rubbish collection, this is people putting the bins out. It took me a while to realise that actually there are no bins; people burn their rubbish or they dump it in the forest or in the ditches at the edge of the village. Don’t blame them for littering, safe in your system of functional government with recycling boxes and a local tip.  Back in Llanidloes people were complaining because the council weren’t emptying the business waste bins often enough, and flytipping in Powys is on the increase because the council has reduced the opening hours of the Potters, stopped vans from going there. Imagine if there were no bin collections, nowhere to put your waste – how quickly our mountains of plastic would pile up then.

But I digress – I realised, when I saw the lorry collecting them, that these white plastic sacks were full of apples! People can sell the apples from their few garden trees to be collected and taken to make apple juice. Here was the motorised cart chugging along the village road and here, further along on the edge of the village, was the lorry into which the sacks were being weighed and then emptied. A rumbling lorry piled high with apples, shedding a few tumbling into the grass with every bumpy corner. There are milk lorries too, ‘moloko’ stencilled onto the side.  One day I saw one stopped. The driver climbed up the side with a bucket and poured it into the top. Wait. Was that a bucket of milk? Further down the road there was a woman waiting, pensionable age, feet wrapped into shapeless lumps, headscarf. At her feet were two plastic buckets. I realised that this was milk collection – that a person in that village can bring their milk from one or two cows to the side of the road, pour it into the milk lorry and earn money. I cannot imagine a circumstance where a small (tiny) food producer can contribute to (and earn from) the industrial scale food industry in the UK.

Summary
We have made our system so complex in its efficiency that people must be large scale in order to profit. Is the idea that every household can sell their produce into the larger food production system outdated or progressive?
I get nervous about making blanket statements like this because, as with most things I am only half informed and only halfway understand. Feel free to correct me.
There’s also the point that this is what people have to do here to survive – if they don’t keep their cows and collect their apples they will not live because there is very little supporting system. No government help. No hotline, no emergency grant aid. Child benefit is paid at 25 euros a month until the child is 3. Every household lives in fuel poverty.
‘My teaching job is a hobby’ said one woman to me. Chronically underpaid, teaching makes her enough money to pay for the gas and electricity through the winter, that’s all. People continue, they cope, they garden and they grow, in order to survive here.

That’s all I have time for today. Every day of walking brings a thousand images that are so tenuous and scarcely formed they will scatter and blow away with the yellow falling leaves. I write to try and capture them, to preserve this nourishment for the snowy winters of my spirit, where plastic collects in drifts and all the food is full of artificial taste. 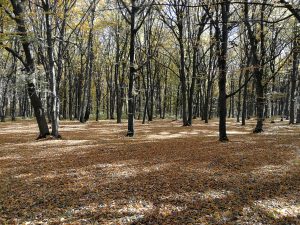 4 thoughts on “Some memories are stronger than others”