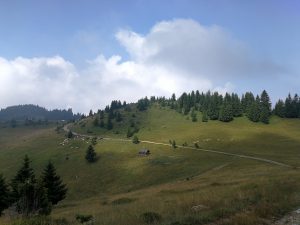 I’ve entered a new country but there’s been a bit of a shaky start to my Montenegrin experience.

New shoes have been a problem; I’ve changed from my trusty full leather ankle length boots to a pair of sandals. It’s the equivalent of taking my delicate, privileged feet out of their protective casing and forcing them to do manual labour. I count about seven blisters so far, some in repeated places, new blisters showing white under peeling patches. The tenderness of my feet is another problem, they’re used to a padded cocoon, not hard plastic nubbles underfoot. On the couple of days of road walking I had to do at the beginning of the country, my feet basically felt like tenderised steak.

It was hot those couple of days, well over 30 degrees and I felt fuzzy in the heat, a buzzing in every cell of my body, confusing and exhausting me as I tramped along. I was a squashed tomato with hamburger feet. Fresh water helped, and this was where the sandals came into their own. Once I came to a spring, of which there were many on the roadside, I could sit for a while and cool down which also meant calming down. I could immerse my feet in the stream of water, run my arms through it, wet a cloth and rub my face, the back of my neck.

I had to do this piece of road walking to Rozaje because of a postage problem. I’d thought that I would walk with my boots swinging off the back of my rucksack as back up but quickly realised an extra 2kg on my back was impossible to deal with. The Serbian postage system was equally intractable and I wound up leaving my boots with a hotel receptionist with the promise that she’d send them to me on a bus once I reached the first town in Montenegro. I cannot bear to list the boring details but three days, several missed connections, a visit back to Serbia, five visits to the post office in Rozaje, one tearful and multiple sweary moments later, my package was enroute back to the UK (via an inspection in Belgrade) and I was free to go into the mountains.

Five days of mountain walking, over to Mojkovac and it was blissfully beautiful. There’s something special about walking at height, the scale makes breath catch in my chest. Climbing out of the sweaty humidity of the valley bottoms up to where the breeze blows fresh and clear and my progress is measured in tiny steps on vast tracts of land.
I found people up there in their summer villages, the houses left lower down, with their sturdy brick walls built for winter. These are cabins, with high pointed roofs for the snow to slide off but otherwise uninsulated, leaving the cabin ready and waiting for the springtime inhabitants. People mostly come for five months, from May to September, bringing up their animals on roads called ‘katun’. I came up to a high, open piece of land as the sun was setting, cleared of trees I could see three separate groups of sheep being walked home on the billows that spread away from me. A number of houses were there too, four or five, decorously spaced from one another. There was nowhere in this acreage that I could camp without being seen and I felt nervous about being in view. Instead I walked through the grassland and back to the forest again. It was steep here and, in the twilight, I found an imperfect spot in the curve of a sidetrack. Here in the long grasses were the traces of the passage of animals. Not domesticated ones, wild ones, the grasses were bent aside but the ground wasn’t trampled as it would be with the repeated press of hooves. It bothered me, to think of wolves coming up out of the forest to find a tent in their path but not enough to get up and move. It was almost dark and I was at the end of my tolerance.
Some people called to me from the track above though, they’d seen me as they strolled past. They used the words bear and wolf. They wouldn’t go away, came down to talk to me, told me that there were dangerous animals in the forest.

The warnings of bears and wolves has increased recently, since I started back again from Raska, down through Serbia and into Montenegro. Most village people will tell me to be careful, warn me of mostly wolves then sometimes bears. I don’t know how seriously to take these warnings. These people live with the constant threat of these animals to their livestock, their income, but there’s a thin line between realistic fear and mythical fear. Bears and wolves are the great phantom creatures of Europe, the signifiers of wilderness, the inhabitants of the edges of human dominion. I have to balance the telling of their presence ‘out there’ with the chances that I will actually encounter one and then, should I actually see one, that it would necessarily present a danger to me and not just run away.

This night though, I decided not to deny the warnings of my new friends and asked them if I could come back to their cabin and sleep in the compound. The girl shuffled a little bit, said there were lots of people there but I could camp outside. They were young, in their early twenties, with the darkened necks and thickened hands of farm life already showing, a ten year old girl silently watching, breathy with excitement. As we walked back towards the dwellings, another woman called out from above us, she’d seen me going past earlier and was curious. I was invited to stay the night with her and accepted, thinking it easier than impressing my presence on unwary adults further on. This was Jikva, a widow of 11 years, coming up here alone for two months of every summer with her four cows and two pigs. The cabin was a shack this time, carpet trodden thin over an uneven earth floor. She fussed with elderflower cordial and a bowl of plums, then opened a box of chocolates white with age. The younger ones laughed at her a little in her clumsy bluntness, her snatching at passing moths made them giggle in particular. I stayed mostly mute, apart from explaining that I was nervous about camping where people might see me, comfortable in my position as the grinning idiot tourist brought in safely from my foolish endeavour.
My saviours left, shaking hands in the light of the single bulb that hung naked from the rafters and I was alone with Jivka. It was easier then, we could be calm and quiet with each other. She laid blankets on the sofa and we touched each other’s arm in affection. 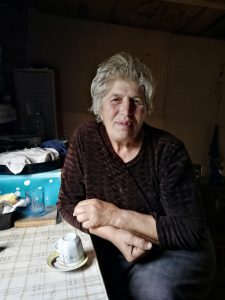 The next morning we drank coffee together and talked about her children, four of them. Her son helped her, bringing her and the animals up here at the beginning of the season, coming to cut the grass that she’d use to feed the cows all winter. She’d sold the sheep when her husband died, too much work to shepherd them alone as well as tend to the cheesemaking.
She tied a cloth over her head, put on a jacket and was off to milk the cows. I asked if I could come with her and was rewarded with the experience of watching her sit squat on an upturned saucepan, tucked under against the cows flank, her hands squeezing thin jets of milk, expertly aimed into the bucket below. The cows were calm and gentle, the final one got up from seated as her time came ready; I gave another a good scratch around the horns and jawline as she extended her neck to lean into me.

Back in the cabin I ate hot milk, bread and cheese as Jivka bustled with the cheese making, straining the milk through muslin then adding a spoonful of liquid from a mysterious bottle before leaving it to sit in the corner. She salted the previous few days production, removing it from the muslin wrapping where it had been weighted down to squeeze out the whey, pouring that into a bucket for the pigs. No refrigeration here. No running water.

We parted with a hug and a kiss, I was thankful that she’d invited me into her life for that short time. Jivka took the bucket of whey, apples, stale bread and crushed corn out towards the pigs and pointed the way towards the spring for me to collect water before heading on my way.

There were fewer cabins on from the town which came partway through my week, Berane. After there the land rose higher and my path kept me on the tops, climbing slowly up to 1900m and dropping down again, over three days. The cabins were there but mostly below me, tucked down to shelter from the wind of the peaks. Water was never a problem though, although the frequency of supply is uncertain, I tended to pass three or four springs a day; a plastic pipe jutting out from the ground with water trickling into a carved wooden trough. The weather wasn’t too hot either, it was cloudy, with even a few hours of rain one day.

My feet are acclimatising, the skin underneath is thickening, there’s less pain day by day. I can feel them stretching under the new effort of supporting themselves, twisting and flexing in the unaccustomed freedom. It hurts, of course it does, but I’m trying to see this phase as a strengthening; my feet and ankles are growing new muscle. I don’t feel worried about not having back up boots, I think they’re going to be fine.

I dropped down from 1900m to 800 on the final day of walking, making it into Mojkovac with aching knees. 59 miles in five days. It’s not a fast pace but maybe that’s mountain life.

Next comes a stretch from Mojkovac to Zabljak, even more remote, or so the map says. I’ve packed a full six days of food. Let the beauty continue. 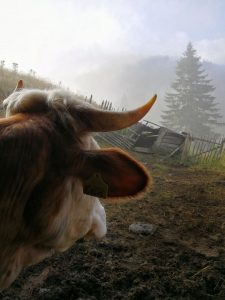 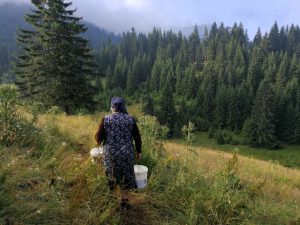