There was no water again that day but I’d taken enough from Aprilija and, as I camped that night in a thunderstorm, listening to wind roaring above me and counting the seconds between flash and rumble, I was happy and secure in the wild forest, sleeping on the pine leaves that blanketed the ground, green moss squelching like plumped pillows.

All the houses were closed up, the ones I came to in the forest. Closed and healthy, with neatly locked shed doors and outside taps that ran dry where the water was closed off, or closed and dead, with holes in roof and broken windows.

Aprilija had told me that her village had been a closed military zone since the second World War, only opened up to civilians for the last twenty years. Before WW2 this area of Slovenia was full of German settlers, who spent 600 years in this area before being moved back to Germany by Nazi occupying government, or then exiled by the following Yugoslav administration. Almost half the villages in the Kocevsko region were left empty, for forest to grow around them.

The migration of humans makes a mockery of modern borders, the idea that we draw lines on a map and say that’s where people should stay now. The Kraijna Serbs, the Hungarians of Transylvania, the Kochsee Germans, the Vojvodina, Kosovo, Albanians of Macedonia, the Sanjak Muslims, the Serbs throughout Bosnia, Muslims of Republica Srpska, forced population exchanges between Turkey and Greece, Turks in Bulgaria, the Roma people, the Saxons of Romania, Vlach people in the Danube Delta.

Empty villages means…no water, and when a car comes winding along the forestry track as I’m desperately on my way towards another cluster of houses that I don’t know yet are empty, I flag it down, show them my empty bottle. They are the first people I’ve seen in more than 24 hours. Father and son, Vinko and Samo, come to the forest to give Samo driving practice. We chat for a while, they tell me the news that all the names I see on the map are empty places, I can walk 3 miles out of the forest and down to the valley where the people live, or I can walk 12 miles to the first populated village on my route. I don’t have enough water to walk 12 miles and as I’m trying to decide what to do, Vinko offers to drive me down to the village, then, once we’re there, says I should come and stay the night. Well yeah sure, as long as they can take me back into the forest the next day. It’s a little inconvenient for them but they do it. And I find myself chatting with Samo for the evening, while Vinko goes into the garage to cut up the deer carcass that was in the boot this whole time. Samo is 19 and studying in Ljubljana, uncertain that this is exactly what he wants out of life but not willing to give it all up just yet. It’s a calm family home of grown up children, pans of food on the stove for people to help themselves, Vinko settling back on the sofa with the grunt of a hard working man. He couldn’t bear to leave me in the forest, he says, knowing that there are bears around. I protest my capabilities but gently, it’s OK to be looked after, to be cared for.

“How is Wales?” says Samo. He thinks of it as a place where it rains, populated mainly by old people, like the cute villages on Sunday night TV where mysterious crimes happen. “Poirot but English”, he says, making me laugh at this unexpected perception. I tell him that I think people have so much that the basic standards of living I’ve seen in the Balkans are viewed as poverty in Britain. That people are less connected to the land, that in just a few generations we have lost plenty of knowledge of how to live in connection with the natural world and now, people are struggling to get it back, to create a food chain that doesn’t involve supermarkets, to relearn wisdom from books. On the table is a carafe of soaking rosehips and whole wheat grain. Vinko foraged the rosehips and it’s a drink he likes to make. “Imagine you moved to Ljubljana and became an app developer Samo, imagine you only bought your drinks in plastic cartons. Your children might remember the drink that grandfather made but their children would have to look it up in books. It only takes a couple of missing generations for traditional culture to disappear”. Another difference as I’ve come to Slovenia is the lack of village shops; they’re a drive away now, in the move for ever more efficient capitalism, where roads are good quality and businesses can’t be supported on the few pence gained on a loaf of bread.

It’s wrong to say that Wales is awful but I think the idea that Britain is at the forefront of how life should be lived is completely misguided. We’re wrecking the planet in the delusion of ever more luxurious concepts of what consists a basic standard of living. We’re manipulating global economics, causing and interfering in conflicts, then voting to keep foreigners out when they come to us in desperation. The rising floodwaters of the messes we managed to ignore because they were at the other end of the world, are beginning to lap at the end of our gardens and we’re afraid. It’s time to look after our own, every man for himself. Climate fear affects every vote. Bring up the drawbridge, there’s no room for compassion.

Of course I manage not to say most of this to Samo, these are half remembered versions of the sentences that form in my head as I drift off to sleep. To Samo I say good luck with university and I hope he manages to sell all that green tea he bought cheap from China.

We hug, again, as they leave me in the forest the next morning. I continue to walk the ridge, up and over the mountain shoulder and around to Bela Voda, the beginning of civilisatsija, as Vinko calls it. One last day of the vuko jebina, the place where wolves fuck, this amusing slang phrase I’ve been hearing since Serbia. The remote places, that will become ever rarer as I head west. 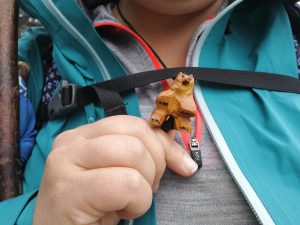 11 thoughts on “Slovenian solidarity in the vuko jebina”