Oh, it’s magic here. Oh how the land has changed from the dry open spaces of the meseta, ploughed to dessication, with small scrubby bushes struggling at field edges.

I have hopped over a mountain and am in paradise. The grass grows green and lush, thickly in the meadows. Cows graze in the distance, underneath the tall towers of concrete that hold up the motorway in the sky. Down here older cars putter, driven by wrinkled faces benign behind masks. Ancient tractors trundle, dust speckled, the types that have their innards visible, matt paint, 40 years old or 50.
First there was the Bierzo valley, where vines grow knotted from the earth in clenched fists. I saw men in the fields, clipping and clearing, as I saw in the prosecco fields of northeastern Italy a year ago.
Then came another mountain, up from Las Herrerrias, a night at La Faba, the village called The Bean, where I spent 3 months 10 years ago, and the next morning 6km up to the mountain pass where O Cebreiro squats. A tourist place now, but the buildings still with the taciturn stone faces of centuries spent guarding themselves against the wind and snow. A village that straggles in a straight line along the camino route, but still hunches itself inwards in unexpected corners and turns. The villages here are old, half broken down and derelict, the remainder old farming places, mostly populated by slow moving squat figures, grandparents all, wrapped in the fashions of their forefathers, aprons and clogs (which are crocs now), corduroy trousers or thick blue overalls. I see washing flapping on wooden balconies that I would not expect to hold weight. I see two cows driven home at lunchtime by a woman with a thin switch, barking and calling at their slow moving backsides. It reminds me of Ukraine in some ways, its small farming structure, pensioners keeping on growing food because they can’t afford to live otherwise. There’s a market one morning in Melide, and at the edges, beyond the big tables vibrant with varieties direct from the wholesalers, are the smaller tables, where people with white hair unpack bags of greens, of spring onions, of walnuts, of white beans. A table of wobbling white cheese, the muslin wrap unfolded to show the gleaming white surface. A man sells eggs from his car boot. Individual smallholders bringing their cornucopia of small wares to market, another thing I haven’t seen in a long while west.

The flowers are coming out. There are tiny daffodils waving at the sides of the path, triumphant trumpets calling out to me in small voices, singing the tune of growth, of new hope, of warmth and light to come. The birds are jubilant, their songs turned up to max volume, squeaking excitedly in the rush to partner up. I wonder how their bodies feel, what gives them these urges, the itch to mate, females in need of eggs, their bodies ready to become heavy, searching for a way but not even knowing it, wanting that swelling comfortable weight.

The pigs have disappeared at night. I haven’t heard the grunting of wild boar in quite some time. I have rarely seen or heard deer since Italy. There was a time, between Bulgaria and Italy, where I would hear deer bark every night that I camped, regularly surprise them to crash headlong away from me in pellmell flight.

Eventually, closer to Santiago, I will come to the eucalyptus plantations, a cash crop valued for their paper pulp, where the long white trunks shoot up impossibly tall, so I have to lean back to look at the tops where the leaves are washing against the sky. There are few branches on a eucalyptus, it sheds as it grows, the bark too, which hangs and sways in long strips, curled like cinnamon quills. It can grow so tall because it twists upon itself, putting its very stem under tension along the whole length, not just at the joins. The smell is rich and comforting, I don’t know where it comes from, the leaves which litter the path, or the bark that piles underneath the trees, or perhaps the seeds, scattered like a spilt button box to roll underfoot.

It can feel faintly hostile sometimes, Galicia, there’s an unsettling feeling of residents peering at me from windows but stepping back out of view when I look up. I wonder how it is to live with so many people streaming past your front door, a never ending rush of hundreds every day of the summer.
I wonder how many photos are taken of the “quaint peasants” against their will; standing at your front door, which is also the front door of your forefathers, daydreaming for a peaceful moment before going to see to the pigs, gets intruded upon by the pilgrim paparazzi.
The dogs are friendly though, there’s that at least, not trained to see pilgrims as hostile. They stand in the street and bark a welcome, then as I coo a little, tell them I invite an interaction, their heads bob and they move their tongues to tell me they want it too. Then move slowly until their great heads are within scratching distance, sometimes leaning their whole bodies against me so I can bed over and ruffle the fur of their backsides.

There’s just so much great age here, as there has been the whole camino, the sense of so many here before us, the pilgrim hospitals and churches.
One day I walked a winding road through a damp valley, a cluster of buildings either side of the path that seemed to be two great farms, each with barns and outbuilding that were stained and crumbling. A row of towering plants in the garden, grellos, something like spring greens, where people pick the leaves as the trunk grows, leaving a tall thick stem with a bunch of leaves at the top. They’re in every garden; to be eaten in galician stew, a warming mixture of greens, potatoes and white beans, poverty food. The cobbled road went over a small bridge then narrowed and twisted between the buildings of the second farm, a wooden balcony hanging over the road and water dribbling over the stones to turn them green and slimy.
There then, the next building was a chapel, low white plaster and stone, a single wooden door with a rusted lock, spun further shut with cobweb lacing, a barred window open to the inside. I walked up to the dark opening, where the light dimly filtered inside from another small window. There was a tableau inside, frozen in time, a carved tableau of peaceful figures looking down into the room, chipped and disfigured by the passage of two hundred years. The altar was a rabble of fallen vases and dessicated flower stems, burnt out candles grey with the dust of decades.
This chapel here for passing pilgrims, built to catch the passing devotions (and alms) of hundreds of years of a journey made in faith.
In Galicia, all the layers of life upon life are still visible, the dust of generations lies thickly in every corner. 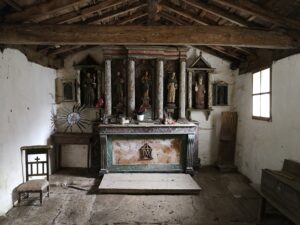 6 thoughts on “Springtime in Galicia”